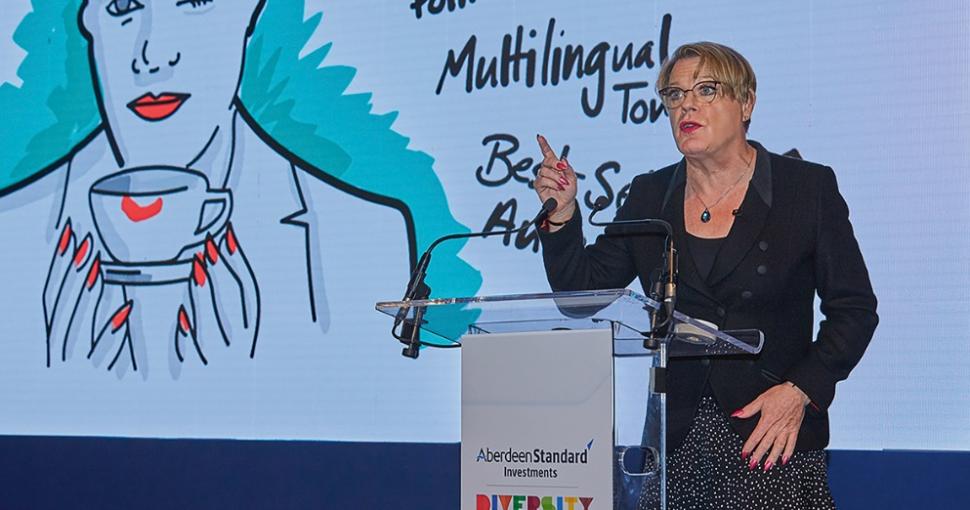 It’s time to stop talking about diversity and inclusion as “nice things” according to the majority of speakers at the fifth annual Aberdeen Standard Investments Diversity Summit held at Gleneagles during The Solheim
Cup week.

In a theme echoed by speakers from Eddie Izzard to Martina Navratilova, anthropologist and social entrepreneur Tinna Nielson told an audience of more than 200 delegates that it’s time for organisations to stop discussing diversity and looking for others to take the barriers down and to actually action it.

She told the audience “It only works if YOU do it. We all need to start doing things which are evidence-based, not just based on good intentions.”

It was a message echoed by Eddie Izzard (pictured), stand-up comedian, actor, charity supporter, marathon runner, campaigner and transgender hero. He urged: “Be brave and curious not fearful and suspicious.”

Derived from his belief that humans were never meant to sit still or settle, but to experience challenging situations and to then to work out how to cope, he described himself as “Special Forces: Civilian Division”. Eddie has previously said that he thinks coming out as transgender or gender-nonconforming allowed him to put himself in other terrifying situations and work them out once he was in them, saying: “I knew I would get through the bad, terrifying bit.”

Dressed in a smart business dress with matching accessories and an immaculate raspberry pink manicure, he took to the stage and told delegates that his “boringness” could also help with being transgender. His attitude is to be surprised and positive about humanity, dealing with those who don’t understand him with his “assertive politeness” actions. According to Eddie, more people ought to have conversations in lifts. For those who seem perplexed by his appearance, he advocates just talking: “If you talk, it seems to get better. For every negative you see you should go out and do a positive, or a double positive. Who gives a monkey’s what you look like? The only marker in your life which should matter or worry or concern us is ‘are you adding to
the world?’”.

Become the “squeaky wheel” was advice from 18-time Grand Slam winner, tennis legend Martina Navratilova. Explaining her actions to secure equal pay between men and women both on the tennis court and in the commentary box she said: “You have to own it and be willing to lose that job. You have to speak up and be the squeaky wheel which gets the oil. You can’t just talk about it; you need to actually do something. Talk is cheap. I would much rather live my life with less money and integrity than pretend to be something I’m not.”

Martina outlined that she didn’t come out until after she had gained her American citizenship as, at that time, being a lesbian was a disqualifying factor for citizenship.

She’s a champion for diversity and inclusion: “Diversity is important. Without diversity of people you don’t have diversity of ideas. Everyone does better if there are more voices in the mix.” Her example of a time when her serve deserted her in a tournament and she needed help, which was eventually found in the shape of ten minutes with a male left-handed player, illustrated this approach.

Equality in sport was just one of Ms Navratilova’s concerns and she joined other speakers in reinforcing the point that diversity in businesses will not only lead to better financial results, but vastly improve social impacts.

A message which echoed the remarks by Anne Richards, CEO of Fidelity International who demonstrated that diverse viewpoints make us perform better and give us better answers: “There’s a direct link between profitability and returns and diverse teams. All leaders don’t need to look or sound the same as other leaders. We should be recruiting from diverse backgrounds including gender, race and disability and focussing on outcomes rather than rights.”

Known for the strength of her views and her inimitable way of conveying them – she once said: “Why do I, as the black woman, have to fix that [inclusion]? There’s fifty of you, there’s one of me. Ya’ll fix it. ... Everybody else needs to make the noise — I want white men to make the noise.” – the audience expected Bozoma Saint John, chief marketing officer at Endeavor, to leave everyone with plenty food for thought. And it’s possible that she gave the audience the simplest yet hardest-hitting and most memorable comment of the day: “Diversity is being asked to the party. Inclusion is being asked to dance.

“Instead of looking up or looking around we should be looking at yourselves. What are you doing? Are you asking people to dance? If not, you’re part of the problem.”